Thank you to Wayne Carey for giving us permission to post part of his article on our website. This is a very touching article highlighting the incredible legacy that Walter Lindrum has left on the game, which has permeated global snooker and billards, and spanned multiple generations into the present day.

Wayne Carey is the Media and Communications Officer for the New Zealand Billiards and Snooker Association.

APSBF (Asia Pacific Snooker Billiards Federation) are holding the 2022 ASIA PACIFIC SNOOKER CHAMPIONSHIPS … March 12TH – 20TH. Covid has made New Zealand entries virtually impossible with the MIQ situations, but we wish all other Asia and Pacific entries every success. We will look forward to seeing these results from Mike Peachey’s informative newsletter.

Sadly, cancelled thru covid, NZ had 9 players & 2 Referees going to Sheffield, UK for the WORLD SNOOKER this month … but!!! If you have Sky or you tube, don’t forget to watch & follow our ustralasian Snooker Champion “Thunder From Downunder” Neil Robertson. Neil has a ‘Rolls Royce’ cue action … one to follow & learn off for sure!

Still more wonderful things happening here. Mr Cody Turner, a 20yr old Wellingtonian, has been honoured with the Walter Lindrum’s “Living Legends” Sponsorship Grant from Tammy Lindrum & her Husband John. Every year they select a cue sport player from around the World that they support financially for that year to compete at their desired discipline and Cody Turner’s is Snooker. Cody has a sublime touch, a great ‘game’ attitude, and is respectful and polite.

Cody Turner in his earlier years was under the tuition of Harry Haenga (great player). Sadly, Cody Turner’s Mum passed in late 2021 and NZBSA President Mark Hannah and his Wife Joyce have taken him in. Mark Hannah too is a wonderful Snooker player (North Island Snooker Champion, NZ RSA Snooker Champion amongst other Trophies).

We ALL wish Cody Turner well – and thanks Tammy & John. Gee our sport is full of … very nice people!

Our sport has some wonderful history, lots of ‘stories’ … so here is just one of those gems! The great Walter Lindrum came to NZ in the mid 1940’s doing exhibitions around the country. He was at one of the Kapiti Coast Towns (Otaki) giving an exhibition with a large crowd in attendance. While doing this he noticed under the second row some movement – with a set of ‘eyes’ there between the public’s legs. He called the 14yr old youngster out from behind the stands and with kindness asked his name and “can you play Billiards?”. Robbie Hannah shook his head in a ’yes’ motion … Walter then invited him to ‘play’. This astonished the crowd as the young fellow developed a 40+ break to cheers & clapping. (In those days schoolboys often did work at Snooker halls before & after School for ‘pocket money’ and of course when nobody was watching have some practice). Walter Lindrum then made a ‘space’ for young Robbie Hannah in the FRONT ROW to watch! Now, doesn’t this again show the terrific people we have in our game. Shall I also mention – YES, I WILL – Robbie Hannah (now passed) is Mark Hannah’s father. Mark now is tutoring “Living Legends Grant winner” Mr Cody Turner. Now that is nice, really nice! 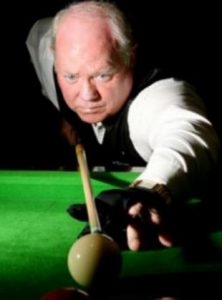