Walter wrote here with my treatise on Billiards:
“A game I have always loved and at which I am proud to be the worlds leader.”

No one can play Billiards, or any other game, if the material is not correct.

The cue is of paramount importance. It should reach (when placed perpendicular on the ground) from the floor to the stud of the player’s collar. That applies equally whether a man be 5ft. 6in or 6ft
The weight should be not less that 17oz. Many prefer a lighter weight, Walter referred to anything lighter as being a toothpick. Having the right cue ensures you will always play with the same arm action.

Stance at the table is tremendously important. Unless you are comfortable and have so placed the body that eye-alignment is correct, all that follows must be false. Aiming at Billiards is akin to aiming a gun to shoot a bird, the eye must run straight down the barrel. So, also must the eye, in Billiards, run along the cue for sighting, and having gained the correct “sighting” the eye should concentrate on the object ball just as one would aim at a target with a rifle at the shoulder. It is the object-ball contact that matters most. If the sighting is correct and the shot is missed, that is the result of BAD CUEING.

The grip of the cue for practically every shot should be of firm character.
Do not fall into the idiotic idea that a loose or flimsy grip will mean a more “delicate” delivery. Maybe it will be so delicate it will “die” before attaining its objective.

In my nursery cannons, the fingers are wrapped round the cue, and nurseries require the most delicate of touch. That surely, supplies the answer to doubters. I screw-back with a firm grip. I run-through with a firm grip. Walter stated “I always hold my cue as though it was part of me.”

When setting about to practice, do not look around for an opponent. Engage the table for a given time and play, systematically. “I spend countless hours on perfecting all my shots”. “He never misses” is an oft-quoted sentence from the audiences I engage. Don’t be misled by the fact that you won a game by overwhelming points. He probably had no chance before you even started. Practice conscientiously. There is only one way.

Walter spent countless hours every day perfecting his shots – He could spend up to 10 hours without a break.

In playing against an opponent, the main thing is to have confidence in your own ability. Always maintain an even pose Judgement will ever be awry if the mind not equal to the occasion. Let your opponent worry – All you must do is to score and score and score. The greatest “safety play” is to place yourself so far in front that your opponent can’t catch you. You can attain this by diligent practice and eliminating guesswork from your play. Professionals never guess – they know!

Fun On the Table

Always remember that it should be WORK first and play afterwards. That being so, first make yourself proficient. The lighter side will follow as a natural consequence.

Many wonderful deeds have been enacted on the Billiards table with three balls. None more wonderful than those standing to the credit of Walter Lindrum, who is universally acknowledged to be without a peer – the greatest cueist of all time.

Every year on the 29th of August which was Walter’s birthday Dolly Lindrum would hold a function at her home in Albert Park to celebrate the memory of a great Australian Sporting Hero.

Below Invitations and photos were provided by Dale Mackay. 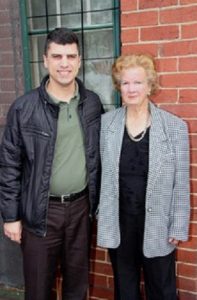 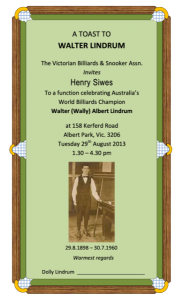 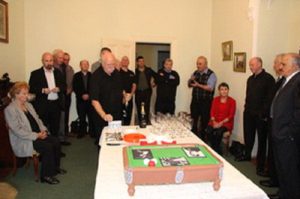